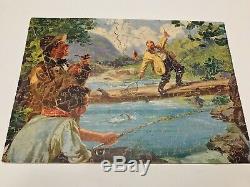 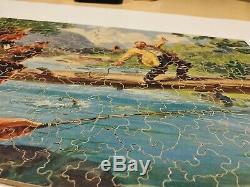 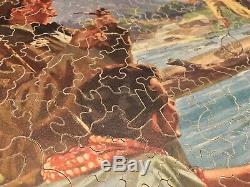 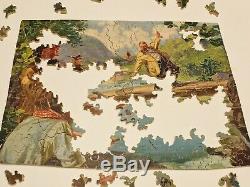 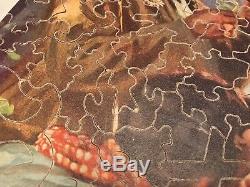 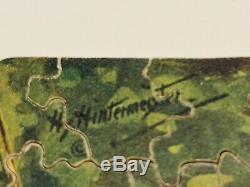 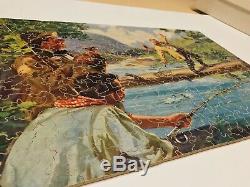 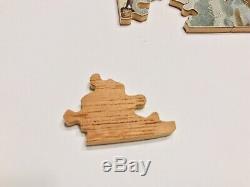 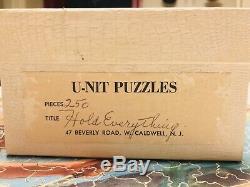 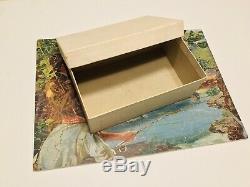 Fun to assemble with unique shapes and quality, thick wooden pieces. Original box is included with hand written label. Below is some information on U-nit puzzles and how they were made... Walker-Turner JigsawU-Nit Puzzles were made from 1932 during the depression until the early 1970's spanning nearly 40 years.

Hand made from thin 3-layer 1/4 inch plywood that had an actual thickness of approximately 3/16 inch. Early puzzles were Basswood veneer on top and bottom with a core. During World War II around 1942 plywood became scarce as the U.

Government controlled the market because the plywood was being used to manufacture PT boats for the war. At this time, Browning was forced to make his own plywood panels which he did. Using a Basswood core he experimented with different woods of varying thicknesses finally deciding on Spanish cedar veneer which can be identified by its reddish brown color and straight grain.

The wood was assembled using Borden Elmer's Powdered Waterproof Glue with the panels separated by waxed paper and then compressed in his own screw press for one to two days. Cutting the puzzles was done purely freehand but there was much to the method. Once the pictures and the plywood were made and bonded in the press, three at a time were stacked together and tacked using brads. Three at a time was determined to be the best in terms of how rapidly the blade would cut and also how long the blade would last.

A blueprint was made that outlined the character pieces or figurals you see in the puzzles. These shapes included letters of the alphabet, human figures, animals and various objects of all kinds.

The blueprint paper was then placed on top of the wood which was then exposed to sunlight to expose the shapes. The puzzles were then cut into sections making them more manageable to cut starting by quartering the whole thing and then cutting those pieces down again sometimes into as many as sixteen parts for largest puzzles.

The sections were then cut freehand with no pattern at all except for the character pieces. In general there are no "one of a kind" puzzles made in production. The only exceptions were personalized puzzles cut for family and friends. The puzzles were cut using jigsaws also known as scroll saws which cut using a reciprocating thin steel blade. Browning used mostly blades that were 10 thousandths of an inch thick which produced a clean tight cut in the puzzles that also minimized damage to the wood.

His preferred brand of saws were Walker-Turner jigsaws made in Plainfield New Jersey. The Browning family still possesses one of these saws and several hundred of the blades. Probably the best was to identify and date these antique puzzle is by the labels used on the boxes.

U-Nit Puzzles were never well marketed and the majority were hand packaged in hand-made boxes. The only branding or logo ever used was the printed "U-NIT Puzzle" on the labels with a hand-written title and piece count. Since many of Browning's puzzles were often distributed in stores and rented like movies of their time, they can often be found with different labels with no reference to the maker. He did sell many puzzles throughout New Jersey, New York and into Pennsylvania including resorts, hotels and an unknown number to F.

Early puzzles may have no address on the label while in following years there is an address at the bottom. The addresses include the New Jersey towns of Newark (1928), East Orange (1932), West Caldwell (1951) and Forked River (1971).